An STL woman arrested for trying to steal a $30 frying pan that she stuffed inside her already snug yoga pants is now a wanted woman.

After Sierra Coleman failed to appear for a court hearing, a St. Louis judge signed an arrest warrant for the 29-year-old accused shoplifter. The warrant, signed earlier this year by a Circuit Court judge, was only docketed last week.

Coleman is facing misdemeanor assault and theft charges in connection with the frying pan heist and her subsequent scuffle with Ikea employees.

An onlooker recorded Coleman struggling with store security guards in the Ikea parking lot. The purloined pot’s handle stuck out from the back of Coleman’s gray stretchy pants, while the circular outline of the pan was visible to anyone with sight. 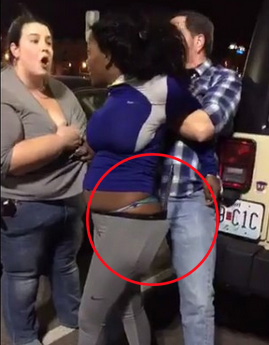 “Is that a pot in the back of your pants?” the onlooker asked Coleman. When the filmmaker suggested that Coleman not fight with security (“Especially you got these people’s stuff in your pants”), she replied, “Okay. It’s $30.” Coleman also remarked that the frying pan theft was only a misdemeanor.

Coleman, who told the Ikea guards she was pregnant, was originally released from jail after posting $500 cash bond. When she is eventually collared for failing to appear in court, Coleman will have to post $7500 to bond out, according to court records.

Charged after his “Partner in Pizza Crime” was killed while robbing...