A woman had a variety bag of illegal narcotics–cocaine, methamphetamine, marijuana, Ecstasy, and synthetic pot–hidden inside her body when police arrested her following a recent traffic stop.

Acting on a tip, police pulled over a 1997 Monte Carlo being driven by Desiree Webster, 20, who was accompanied in the vehicle by Jaral McCollum, a 39-year-old convicted drug dealer. Investigators had been told that McCollum would “travel with females and have them conceal the contraband inside their body.”

When a patrolman told Webster that police thought “drugs are in her private parts,” she claimed not to have “any drugs in her.” Webster, who had turned over to cops a small bag of pot that was in her bra, was arrested and transported to the county lockup.

After Webster refused to cooperate with a strip search, she was taken to a local health care facility where a CT scan revealed a “baggie type mass” in her pelvic area. Webster eventually removed what cops described as a “plastic baggie about the size of a fist from her vagina.”

The baggie contained three other baggies that held cocaine, meth, Ecstasy pills, marijuana, and synthetic cannabinoids. A white powder weighing 1.52 grams was also found, but police “couldn’t get a positive field test on this substance.”

A criminal complaint notes that a drug dog, Rekon, alerted to the presence of narcotics inside the Monte Carlo. The canine reportedly showed “an extreme level of interest on the driver’s side seat.” 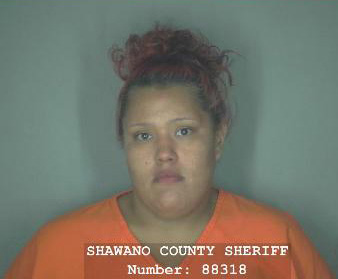 Pictured above, Webster has been charged with six felony drug counts. She was also hit with multiple felony bail jumping raps since she was busted while free on bond in an earlier felony case (which remains pending). McCollum was charged with multiple narcotics counts.