Two women are jailed on child abuse charges after a Snapchat video showed three small children smoking what appeared to be a marijuana blunt.

Police in Winston-Salem last night arrested Michaela Pearson, 21, and Candice Little, 18, in connection with the troubling video. Both defendants are locked up in lieu of $150,000 bond after being charged with three counts of felony child abuse and three counts of contributing to the delinquency of a minor, a misdemeanor.

In the video, Pearson is seen handing the blunt to the children. Little apparently recorded the children smoking and posted the video to her Snapchat page.

Police have not said what the relationship of the children is to either Pearson or Little. None of the children appears older than four, while the youngest of the three is a toddler.

On the video, Pearson, blunt in hand, can he heard asking the children, “Which one of you want to hit this?” After the toddler exhales smoke from his nose, Pearson and Little exult with glee. When a little girl coughs after taking a long puff on the blunt, Pearson says, “Ooh, yeah, big gas. Big gas.” When the oldest child holds on to the blunt too long, Pearson directs him to “Pass it to your sister.” 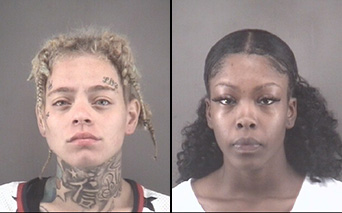 Pearson and Little were arrested hours after the video began going viral on Facebook. The women were taken into custody at a University Inn & Suites hotel, where cops found drug paraphernalia in the room occupied by the pair. The children, police reported, were “taken to a local hospital for medical treatment where they remain for observation.”

Pearson and Little are scheduled to appear in court tomorrow.